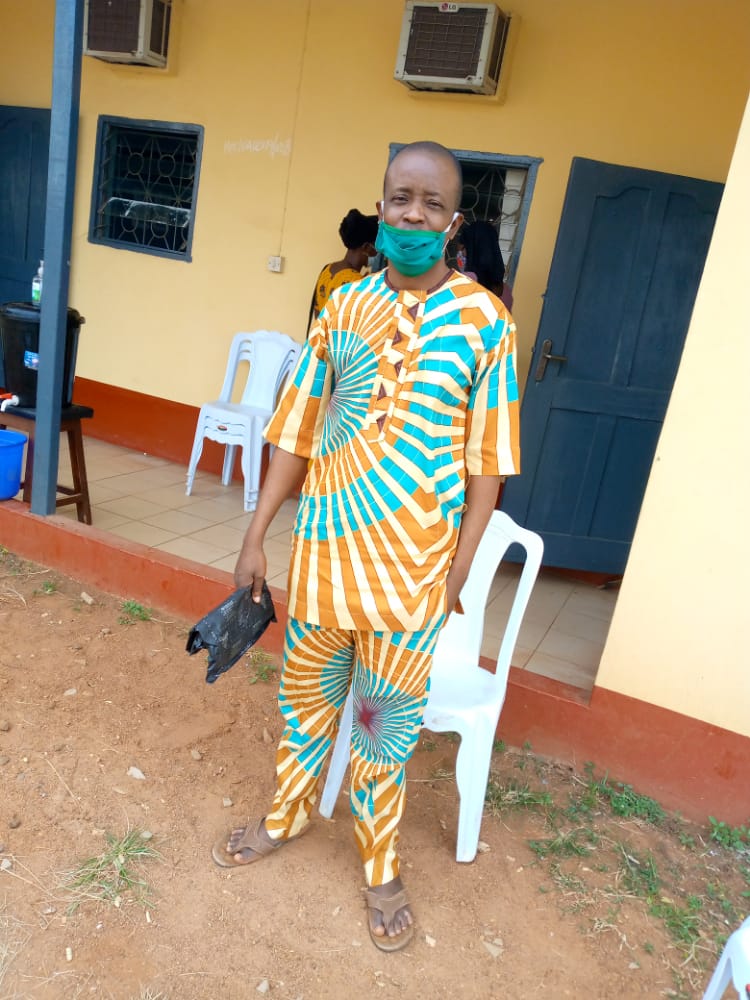 When Pastor Akinteye Timothy started coughing in February 2020, he thought it was a “normal cough.” He walked into a patent medicine store in Sagamu, Ogun State, South-West Nigeria, where he lives, and purchased cough syrup.

Days and weeks after taking the syrup and other self-medicated drugs, his health did not improve. Rather, his active life style of pastoring a church, regular exercises, and coaching football teams in his neighborhood and church became a chore.

“I always do a lot of jogging and running to keep fit. I can exercise for up to an hour but as I became sick, I discovered that after ten minutes, I’ll be tired and panting with chest pains,” he said.

Despite his worsening condition, Mr. Akinteye did not go to the hospital until he fainted. In May 2020, he was rushed to Olabisi Onabanjo University Teaching Hospital (OOUTH) for emergency treatment. OOUTH provides tuberculosis diagnosis and treatment with support from the Institute of Human Virology Nigeria (IHVN), USAID Tuberculosis Local Organizations Network (TB-LON 3) project, which commenced in April 2020.

After several tests, and a chest x-ray, he was diagnosed with tuberculosis. “I didn’t know much about tuberculosis till when I was admitted. I did not even know that treatment for tuberculosis is free. If we were told to pay for the drugs, I would not have been able to source money to pay for them,” he stated.

Mr. Akinteye was counseled and immediately began a six-month treatment program to treat tuberculosis. “I was told that being diagnosed with tuberculosis is not the end of the world. I can be tuberculosis free as I adhere to my treatment, eat well and rest well,” he said.

As he began taking his drugs, he noticed improvements. “I am feeling fine. I see the good effect of the drugs in my body. My appetite has returned. Many people thought that I will die but now with the treatment, I am doing well. You can see that I am very happy,” he added.

His concern is now for others in rural communities who do not know about tuberculosis and the free treatment he is benefiting from.

“It is common here for people to take ‘agbo,(herbal mixture) and self-medication instead of going to the hospital. I have begun telling people to go to the hospital for free tests and treatment. People suffer because they are ignorant. Believing God for healing does not mean that you should not take advantage of treatment in the hospital. Whenever I am preaching I tell people that if they notice that they are not feeling well, they should go to the hospital and not to quack doctors,” the pastor stressed.

According to IHVN Chief of Party, USAID TB LON project, Dr. Aderonke Agbaje, “we want to improve the efficiency of our community activities by mapping tuberculosis hotspots and targeting our active case finding activities to those hotspots. Also, every Index Tuberculosis Patient needs to have their contacts traced so that they can quickly commence treatment if found to have tuberculosis. This, along with other prevention measures we would put in place, would prevent their family, friends and other community members from developing tuberculosis.”

Pastor Akinteye is one of the 1,225 patients enrolled on TB treatment from May to August 2020. The TB LON project seeks to drive results from communities to improve prevention, diagnosis and treatment of tuberculosis.