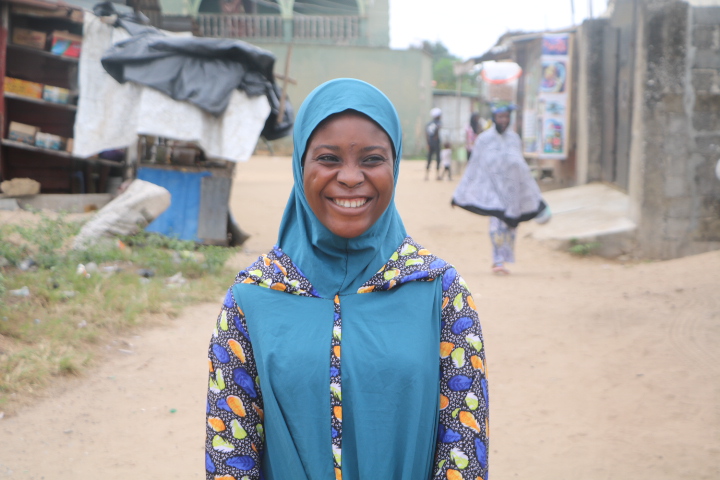 Smiles have replaced Zainab Muhammed’s constant cough and chest pain. 22-year-old Zainab went to a patent medicine store for cough syrup when she was plagued with constant cough and took herbal medicines when the symptoms persisted for two months. In January 2022, a community volunteer spotted her during routine community visits.

After the test, my diagnosis was positive to tuberculosis. A nurse at the hospital counselled me and gave me some medications for free. Initially, I thought the drug will not work especially as I didn’t pay any money but immediately I started taking the drugs I saw a huge difference. I was getting better by the day.”

After six months, Zainab completed her doze of medications.

“Now I am free and very happy. I am advising anyone that coughs around me to allow themselves to be screened by the community volunteer. Test is free and treatment is free too,” she adds.

Another survivor, 17-year-old Agbodohonji Oluwatobi, was screened in her school, Ajara Comprehensive Senior High School. “When some health workers came to our school, they talked about symptoms of tuberculosis like coughing, I went to give my sputum because I knew that I was coughing, had chest pain, and was not breathing well. The following week, my dad and I got a call to inform us to go to the hospital for medications. I started tuberculosis treatment, and I am feeling fine now.” Tobi hopes to be a nurse to help people who are sick.

Gregory Bagwolo has survived drug-resistant tuberculosis. It started with a “strange sounding cough” for four months that did not respond to cough medicine. His mother was concerned about the cough, his poor weight, and unusual sweats.

“He was lean despite all that he was eating. We did not know it was multi-drug resistant tuberculosis till a tuberculosis screening program was conducted in his school Badagry Senior Grammar School. When I was told about the result, that he had tuberculosis, I thought it was a spiritual attack because his brother recently had a dislocation which we are managing,” Gregory’s mother says.

10-year-old Gregory started treatment for drug-resistant tuberculosis, but he often hid his drugs because of the side effects of vomiting and weakness. However, he overcame this reluctance with the support of his mother and friendly neighbors. He has now recovered and is doing well.

Gregory, Oluwatobi and Zainab are all beneficiaries of the USAID TB Local Organizations Network (TB-LON3) program which is rapidly scaling up access to tuberculosis services in Lagos, Osun, Ogun and Oyo states.