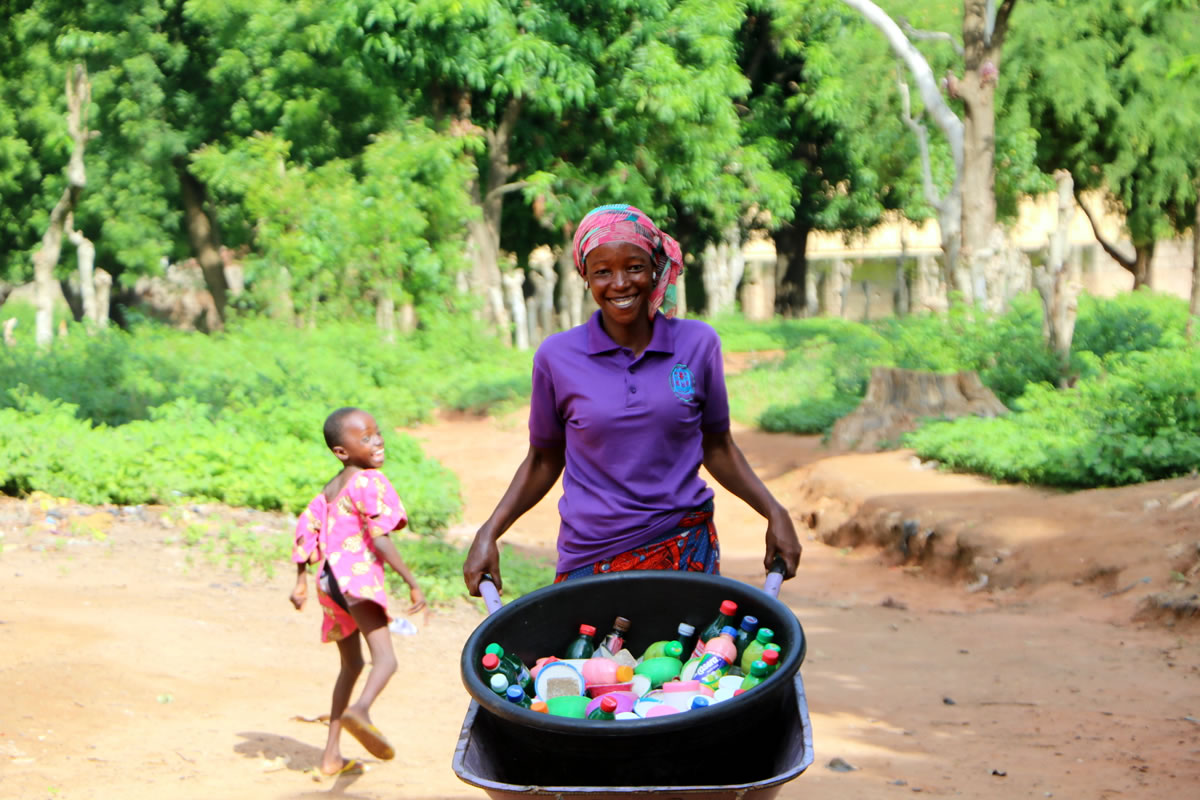 Binta Gwer has never seen the four walls of a classroom. She says that while growing up, her parents believed that the girl-child sent to school would end up in prostitution.  Binta who is now 25 years old, has resolved to ensure that her daughter and two sons go to school. “I can do any odd job to make sure that they are educated,” she says.

When her husband, a driver, had an accident, Mrs Gwer’s children had to drop out of school for more than a year due to lack of funds. “His right arm and leg got broken and he has been going for treatment since then,” she says. She states that, “When it happened, I kept wondering how to feed the children and still send them to school.”

Her joy knew no bounds when a community volunteer at Mother and Child Care Enhancement Foundation (McCEF) supported by Institute of Human Virology Nigeria (IHVN) with funding from the US Centers for Disease Control and Prevention (CDC) gave her an opportunity to learn skills and fund a business to empower her household in providing for the needs of the children.

“I was taught how to make shampoo, hair cream, perfume, room freshener, body cream and liquid soap. Before, I only knew how to make soda,” she says. Binta also received ₦3000 to help grow her business. “I used to make 146 pieces of soda a week. Now I make 700 pieces and all of it gets sold in a week,” she says.  She now makes ₦6000 a month instead of the ₦2000 she used to make from selling only soda, in the past .

“I am happy that my children can eat and go to school in spite of their father’s accident. I am able to pay school fees and buy the stationeries that they need. The business also saves cost because we use the soap, soda, body cream and shampoo at home,” she says.  Her home in Angwan Tiv in Agyaragu, Nasarawa State is open to clients who buy several items in both wholesale and retail quantities. Binta also sells at Agyragu market on Fridays and trains people who want to learn how to make the products.

IHVN Orphans and Vulnerable Children (OVC) Lead, Mrs. Jummai Musa says that 5,086 households in Nasarawa State and the Federal Capital Territory have benefited from Household Economic Strengthening (HES) activities of the Institute from October 2017 to October 2018. “HES activities increase the ability of families to access finances and invest in the education, nutrition and health of the children thereby achieving the goal of keeping children healthy, stable,safe and schooled. Supporting vulnerable households is a preventive strategy against new HIV infection,” she says.

“With the interest I have gotten, my two sons were able to start school. Before now, only my 10 year old daughter was in school… I never got a chance to be educated. That is why I am unable to write my name. My children are now able to write their names, write my name and would have more opportunities,” she said.

According to her, the non-refundable HES grants are to empower infected and affected households because research indicates that HIV impacts on the individual’s ability to support oneself, increases vulnerability and exposes people to unemployment, discrimination, malnourishment and access to education.

Amina Ismail, a widow living with HIV and her family, has also benefitted from the HES activities that the Institute implements. Her trade in tomatoes and pepper in Akurba, Nasarawa State received a boost with the ₦10,000 funds given to her by IHVN in April 2018 through Ebo Community Health and Development Initiative (ECHADI). “I used to buy a quarter of a basket of tomatoes to trade with. Now I buy a full basket of tomatoes and a bag of pepper,” she says.

“With the interest I have gotten, my two sons were able to start school. Before now, only my 10 year old daughter was in school… I never got a chance to be educated. That is why I am unable to write my name. My children are now able to write their names, write my name and would have more opportunities,” she said.

She also attends a monthly forum for caregivers of vulnerable children in the Chief’s palace in her community where they are taught hygiene, nutrition and financial skills. “Because of what I have been learning, I have started saving N200 daily from my profit. Whenever I am in need of money for my business or family, I am allowed to borrow some from our pool. Then, at home,  I make sure that we wash our hands before eating, get clean water for drinking and keep our environment clean,” she says.  Amina’s children also participate in a kids club organized by the community-based organization where they meet with other children and learn social skills.