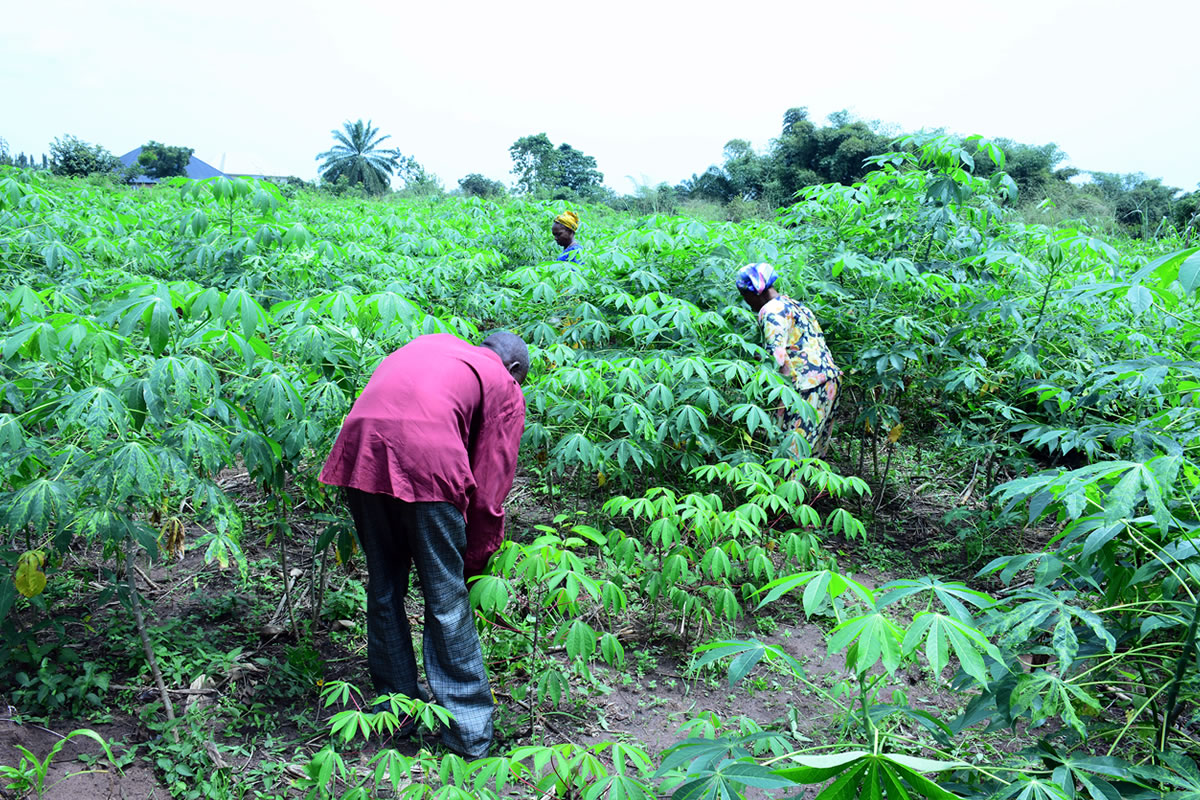 Believe Odibie was curious when he noticed some patients running out of General Hospital Issele-Uku into the bush. He observed this happen for up to four times from his nearby farm of vegetables, yam and cassava and decided to ask hospital staff about it while visiting a patient at the hospital.

He was told that the patients who ran into the bush were people living with HIV who did not want to be identified as such by others who had come into the facility. Believe was surprised that stigmatization for HIV in Issele-Uku was still so high. Though he is living with HIV, Believe was accessing care and treatment at Federal Medical Center (FMC) Asaba, one of the facilities supported by the Institute of Human Virology Nigeria (IHVN) with funding from President’s Emergency Plan for AIDS Relief (PEPFAR) through Centers for Disease Control and Prevention (CDC).

Believe had served as a volunteer in FMC Asaba and received several trainings which increased his knowledge about HIV, boosted his self-confidence, helped him live a healthy life and have a positive outlook to life. “I decided to share the knowledge I have gained and requested that the HIV services I receive be transferred to General Hospital Issele-Uku,” he says.  Since his transfer in February 2017, Believe goes to the hospital daily to assist in conducting health talks. “I knew that they would trust me if I accessed treatment in the same hospital with them,” he adds.

Though Believe has to take the 32 kilometer journey from Asaba, where he resides to Issele-Ukwu often, he says that he has found joy telling his peers that, “All hope is not lost when someone finds out that he is HIV positive. We talk about adherence to medications, eating  balanced diet, adequate rest and how to avoid self-stigmatization. Whenever they see me, they feel happy,” he says. Believe had also spearheaded the formation of a community support group, Health Care Support Group, which began meeting at his family house even before his treatment services were transferred to Issele-Uku. The membership of the group has expanded to about 30 members and they now meet every first Saturday at the Catholic Mission in Issele-Ukwu.

A Matron at General Hospital Issele-Uku and Coordinator of the Group, Mrs. Beatrice Onochie says that group has reduced stigmatization in the community. “Initially, people were not attending but now they attend. Some share what they are doing to stay healthy to encourage those who have just discovered their status to overcome self-stigmatization,” she says.

Nwaokolo Chinye a member of Health Care Support Group says that, “Before, I was afraid, I couldn’t tell anybody about my status, I used to cry a lot and if I see any of my town people in the clinic, I will hide from them until they introduced us to the support group. Now, I am happy with myself. They told us how to eat good food, be neat and take our drugs. Mr. Believe and Mrs. Onochie still talk to us in the clinic,” she says. For Mrs. Dorathy Agalimi, a widowed mother of four children, the support she has gotten from the group has kept her alive and healthy. “After I tested positive to HIV, I was afraid that my husband’s relatives would not accept me and that I cannot relate with others, especially my children. At the clinic, they talked to me and I started having hope. My children can now eat and play with me and I am okay. I meet other people living with HIV and know that I am not alone.”

The Community Support Group has also utilized the monthly support gotten from IHVN to rent a one-acre piece of land for farming. They have commenced work on the land by planting maize. “We hope to still plant cassava after the maize harvest. We’ll share the harvest among ourselves and sell some part to make money for the support group,” Believe says.

IHVN Senior Program Officer Care and Support, Mrs. Margaret Ike says that Believe is one of the many people living with HIV who have been empowered to have a positive outlook to life in spite of his HIV status. “We have kept on encouraging hospitals to support the establishment of support groups and built the capacity of people living with HIV such that they can influence their peers to live healthy lives.”

According to the Delta State Coordinator of the Network of People Living with HIV/AIDS (NEPWHAN), Mr. Christopher Ogbe, there are plans to replicate the success of Health Care Support Group in other support groups.